The inaugural conference of The Telemedicine Society of India, Maharashtra Chapter was organized by TSI Maharashtra Chapter jointly with the IMA Pune branch on 1st Sept, 2013 at Dr. Nitu Mandke IMA House Pune. Over 200 delegates attended the Conference.The CME started off with a welcome address by Dr.Prakash Marathe Secretary IMA Pune branch.He called upon Dr Bharati Dhore Patil Immediate Past President IMA and Shri L.S.Satyamurthy President Elect TSI to chair the morning session. Abhijit Gupta opened the session with a demonstration of Praxify. The product generated a lot of interest and enthusiasm amongst the audience.

Another novel demonstration Health Risk Assessment (HRA) for lifestyle diseases through Telemedicine was made by Dr.B.S.Ratta.A volunteer from the audience underwent the HRA and his report was received on his mobile phone which was shown to the delegates subsequently. Dr. Ratta showed how this tool could be used to detect early cases of Obesity, Diabetes, Hypertension, increased Lipids and cardiac disorders at an affordable cost by holding mass camps at work site.

The conference was inaugurated by Dr. P.K. Sinha Senior Director (R&D) and High Performance Computing) at the Centre for Development of Advanced Computing (C-Dac)Pune, in the presence of Guest of Honour Dr N.K. Dhamija, Deputy Commissioner Training and Nodal Officer Telemedicine , Ministry of Health and Family Welfare(MOH&FW) ,Government of India, New Delhi. The other dignitaries present on the dais for the Lighting of Lamp ceremony were office bearers of Telemedicine Society of India and IMA dignitaries Dr. Prakash Marathe and Dr. Bharati Dhorepatil. Dr P.K Sinha appreciated the role of TSI and spoke on development of cloud computing technology for development of Electronic Health Record (EHR) for every citizen of India linking it to Aadhar cards. With the EHR being central to most health informatics applications, several countries have initiated programs for implementing national EHR infrastructures. Building and implementing such a national EHR infrastructure requires an understanding of healthcare standards, coding systems, and standard frameworks, each of which may vary across borders and/or come from a myriad of sources. He then spoke on Mercury Nimbus- CDAC’s Cloud Enabled EMR/EHR and Telemedicine Suite. In fact Mercury Nimbus was launched in this conference and was well accepted by the audience. Mercury Nimbus was then demonstrated by Gaur Sunder and Praphul Kolte. It consists of three tools; Mercury on Cloud, Cloud Repository and Mercury for Android, specially tailored to cloud/clustered infrastructure. It can be used in Telemedicine scenarios like doctors working in multiple clinics, groups of clinicians working, clinicians at remote end with clinicians at specialist end and HSP-to-HSP interaction.

Dr N.K. Dhamija and Dr. S.K. Mishra shared their views on the Central Government initiatives in Telemedicine and healthcare sector including National Medical College Network. Dr. N.K. Dhamija stated that MoH&FW, Govt. of India is laying major emphasis on telemedicine application and there is a huge budget provision for the same to help in bridging the gap between Rural and Urban health divide. He also highlighted the fact that Tele-health Act is on the anvil and National Task Force for standards in Telemedicine will be rejuvenated. Dr. B.N. Mohanty spoke on the Odisha TM Network and it’s functioning in the state of Odisha. He demonstrated how three Government Medical Colleges in the state have taken on all the districts of Odisha to provide medical care through Telemedicine. Dr. Suptendra Nath Sarbadhikari spoke on National Health Portal. He mentioned that it will now be possible for Indian Doctors to upload useful clinical data and interesting medical case reports on the National Health Portal (NHP). This portal is likely to be inaugurated by October,2013.

The Afternoon session was chaired by Dr N.K.Dhamija and Dr Suparna Telang. Presentations on Tele-Psychiatry were made by Dr. Suparna Telang and Dr. Animish Chavan. They made a video presentation on use of Tele Psychiatry – SCARF in Chennai. They emphasized that it saves time and money for the patient and the service provider. They discussed various revenue models and a simple software to run a Tele-Psychiatry program. This was followed by a presentation made on Tele Ophthalmology by Dr. Sangeeta Wagh and Dr. Suchetra Kulkarni. Through video-conference with Aravind Eye Hospital of Madurai, they showed how from Ophthalmic camps the images of retina were transferred for opinion to the base hospital and from there treatment offered to the camps. They also made a video presentation on Retinopathy of Prematurity. Mr. B.S. Bedi , Advisor, CDAC and Immediate Past President of TSI spoke on EMR Standardization and it’s Inter-operability. Shri L.S. Satyamurthy, president-elect of TSI and ex-director of Telemedicine, ISRO/Deptt. of Space spoke on telemedicine as a service that can be successfully be adopted for the societal benefits in bringing healthcare to the rural and the under-served population, both in India and in other developing countries. Dr. D.B. Kadam, Professor of Medicine, Sassoon General Hospital and Nodal Officer, Telemedicine (SGH),NRHM(Maharashtra) spoke on how Maharashtra has come on to the Map of Telemedicine. He highlighted the Government Medical College Network and showcased the TM program at Sassoon General Hospital. This was well appreciated by one and all.

In the concluding session convenor Dr B.S.Ratta proposed vote of thanks.

MahaTelemedicon 14 this year was held in conjunction with Sparsh Advanced Laparoscopy Center and Bharati Vidyapeeth University Medical College and Hospital , through the aegesis of IMA Sangli. We presented the Journey of Telemedicine in India along with Developing information technology infrastructure for health care.In addition there were sessions on Tele Psychiatry and Mercury Nimbus and its mobile applications .C Snomed was show cased.

The programme was accredited by Maharastra Medical Council with 2 credit hours. Over 350 Delegates were registered and spot registrations added another 25 to the list. It was an eye opener on Telemedicine in this part of Maharashtra and enthusiased many to the field. We are following up to make them as new members. We thank IMA Sangli for its whole hearted support in organising the event.CDAC Pune as usual were the spine of the event.Thanks to the team headed by Shailesh Narvaria, Deepankar Dixit, Santosh Nirmal and Deepak Chaudhary.

SI Maharashtra Chapter and Ruby Hall Clinic jointly organized the International Telemedicine Conference on 9th, 10th and 11th Nov. 2017 at the Sheraton Grand in Pune. The theme of the conference was “Digital Health – Shaping The Future of Health Care” As usual we had a mixed audience including Doctors, Engineers, IT specialist, Regulators, Policy makers, Researchers, vendors, innovators, and a contingent from Russia and Baltic showcasing Telemedicine and communication technologies currently in vogue. The conference was attended by more than 350 participants from India and Abroad. Key topics covered were Telepractices viz. Tele Cardiology, Tele Oncology, Tele Diabetes,Tele Radiology, Tele Psychiatry, Tele Stroke, Tele Ophthalmology, Telemedicine in extreme environment, Virtual clinics, e Labs, e ICU. Presentations were par excellent and good discussions were generated during each sessions, and lots of participants requested organizers for more time. Another highlight was the Indo Russian Forum, represented by 5 Russians in connection with 70th year of Indo Russian Friendship Treaty and the BRICS session both of which were coordinated by Dr. S. K. Mishra our own P. P. TSI and Maharashtra Chapter places on record, its gratitude to the doyen for all his help. Plenary sessions, Legal & Regulatory sessions, Telemedicine Networks around the world were other highlights of the conference.
For the first time Maharashtra Chapter initiated The Awards for Best Mobile App for Virtual Clinic, Best App for Social Responsibility, Best Paper etc.
The Conference was recognized by Maharashtra Medical Council, Mumbai with 4 Credit hours.

Over 50 free papers were presented at the conference.

Presidential Oration by Prof. K. Selva Kumar took the cake. He vividly explained his journey and milestones in Telemedicine and the audience was awe stuck. All the Past Presidents , members of Exe. Committee from the National and State bodies were extremely helpful and joined hands to make Telemedicon 2017 a great success with support from the Headquarters and dynamic President TSI Prof. K Selva Kumar. A citation was given to Dr. Vijay G. Prabhakar and the two Past Presidents Dr. B. S. Ratta and Dr. B. N. Mohanty.

Any omission in the report is not intentional but may be an oversight and the committee seeks pardon. The entire show would not have been possible without the management of Sheraton Grand and event organisers MedVent to whom we are much obliged.

Telemedicon 2019 was held at the India Spinal Injuries Center, New Delhi between 29th November and December 1, 2019. 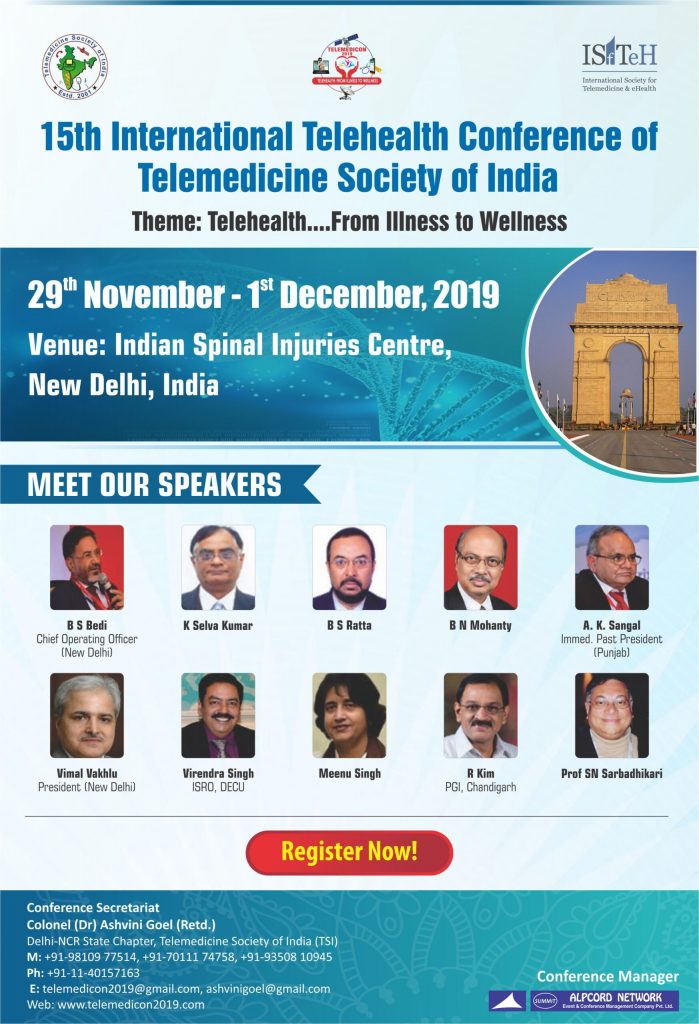 On the occasion of Telehealth Day, Dr. D. Y. Patil college had organized.